Swiss System: A Complete Guide for Organizers and Arbiters

The Swiss pairing system is used to pair the participants in the tournament.

Think about this - What are the main goals of a chess event?

From a fundamental perspective, there are two:

Find the player who's played the best chess in the event.
Determine the standing of all the players.

And to determine this, we need to test the player's strengths by making them play against each other.

And this is where the Swiss system of pairing comes into the picture.

But what makes it the most popular pairing system, one that's used in big and small chess tournaments across the globe?
Also, what exactly is the Swiss system? What are its rules?
How can you use it to discover the best players in your club?
Is there any software that pairs the players using the Swiss System?

You'll soon discover the answers to all these questions in the next 7 minutes.

Before we dive into the technical details, let's uncover the huge popularity behind this system.

Why the Swiss system is the most popular pairing system

Imagine selecting a team of the strongest 4 players for your chess club.

If there are 10 players, it's easy to ask them to play against each other and determine the winner.

But what if 100 players show up for the selection? Or even 1000? How do you find the best player while giving each player a fair chance to win?

You might try knockouts. But it's not the best way to decide the winner. You don't want a strong player having a bad day getting knocked out while a weak player with luck on his side getting selected.

This is where the Swiss Pairing System becomes useful. It's popular because you can:

Draw lots even if there are many players (even over thousands!)
Give each player a fair chance of winning the event
Determine the rank of each player based on their performance
Conduct a chess tournament with limited financial or administrative resources.

Under the Swiss Pairing System, there are 5 types:

Here we'll explore the FIDE (Dutch) System - It's the most popular one, used in almost every major open tournament.

If you're curious to learn about others, we suggest you read FIDE's Arbiters Manual 2022.

Now let's dive into the rules of Swiss pairing.

There are fixed number of rounds, which are decided before the tournament begins. Usually, if there are 300 players, 9 rounds are enough.

Because of this, players understand the total number of games they'll play before the event starts.

Two players can play against each other only once, not more than that.

There are no knockouts or eliminations; each player can play all the rounds regardless of the result.
Each player's color usually alternates per round or every 2 rounds, and no player should get the same color for 3 games in a row.
Generally, players with the same points are paired against each other.

If Matt is on 2 points, John on 1 point, Serena on 2 points and Max on 1, and none of these players have played against each other, then the pairing for the next round will be:

In case of odd number of players, one of them won't be paired and will get a bye. Yes - this also means the one who doesn't get paired gets a full point.

Now let's look at the Swiss pairings from a technical perspective.

How to use the Swiss System to pair the participants in a chess tournament?

Let's imagine you are assigned to select the best 4 players to represent your club.

For creating the pairings, you can use the ChessManager software. It's free for a limited number of days, and as you'll see, the interface is easy to use.

Step 1: You first need to login and create a tournament. For this, click Create on the main dashboard. A popup like the one given below will appear. 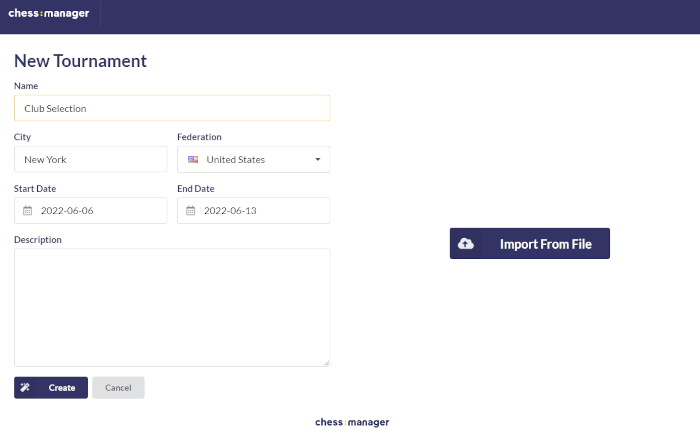 Then you fill in all the necessary tournament details, and click Create once again.

Step 2: Make sure you set the Pairing to Swiss System. 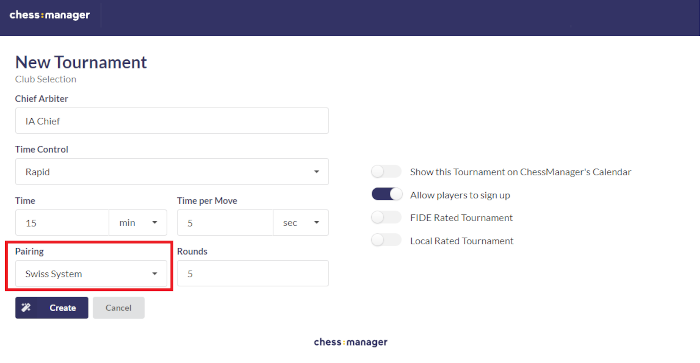 This way, ChessManager will automatically create and follow the Swiss Pairing parameters set by FIDE.

15 players register for the tournament. A decision is taken to hold 5 rounds to determine the strongest four who'll form the club's team.

Step 3: You add the participants along with other details such as ratings. And based on their ratings, the starting list of players is created. 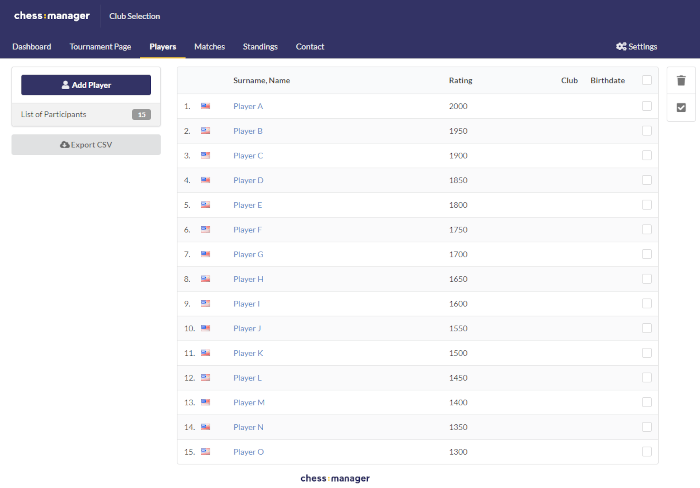 As per the Swiss rules, the starting rank of the players is decided based on their ratings.

Step 4: Once you have the starting list, It's time to pair. And with ChessManager, it's really easy to do so! Just go to the Matches tab and hit Pair. 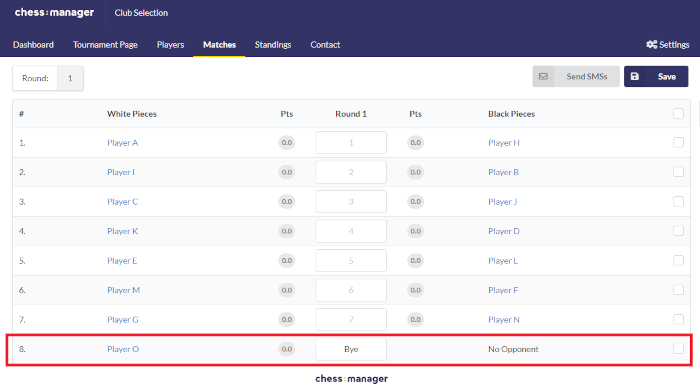 ChessManager will automatically generate the pairings.

If you notice, we had 15 total participants - an odd number. So one player can't be paired and hence gets a bye as per the Swiss rules.

Step 5: Input the results for every round and hit the Pair button. Rinse and repeat this for all 5 rounds.

Step 6: It's now time to determine the winner. All you have to do is go to the standings tab and see the final rankings. That's it! 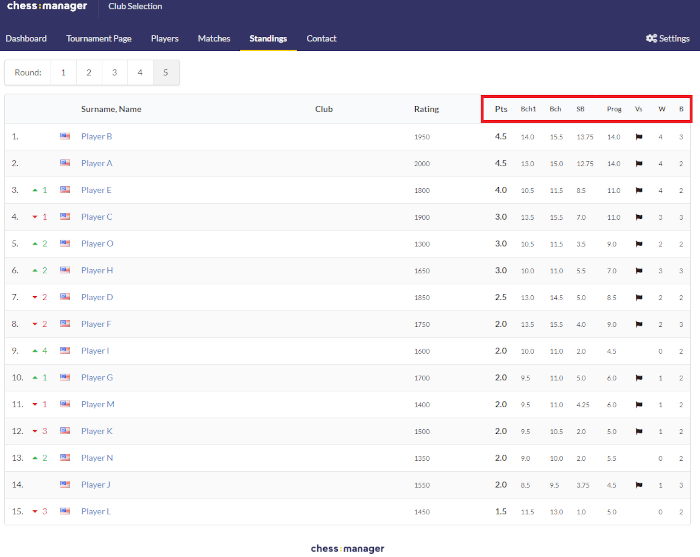 The winner of the tournament is decided by who scores the most points. If the points are same, tiebreaks like the following come into the picture:

Bucholz: The total points scored by all opponents of a player.
Progressive: The cumulative victories for the player in a tournament.
Direct encounter: What was the result of the game between the tied players?
Number of wins: Who has won more games?
Sonneborn-Berger (SB): Sum of the total score of the opponents a player has defeated (including wins by forfeit) and half the score of the opponents with whom the player has made a draw. And if a player has lost against a certain player, that result isn't counted in this tiebreak.

In the above tournament, both Player B and Player A scored 4.5 points each. But Player B emerged on top because they had the better 1st tiebreak - Bucholz 1.

What software can I use for hosting Swiss pairings?

You can use ChessManager, a FIDE-approved pairing software that be used for creating Swiss system pairings.

And some of the strongest chess events in the world like the European Rapid and Blitz Championship 2021, Polish Chess Championship (from 2015 - 2022) have used ChessManager for creating pairings.

When was the Swiss System introduced?

Julius Muller used the Swiss system back in 1895 in a chess tournament in Zurich.

Can the Swiss System be used in online tournaments?

Yes, even online tournaments can use the Swiss System for drawing lots between the participants. The process remains the same - First, create a tournament. Then input the results, pair the players and repeat till the last round.

The Swiss System is the most popular chess pairing system out there. Almost every major chess open uses this system, to pair the participants.

Are you looking to host a chess open? Or maybe just a small tournament at your local club? ChessManager can help create pairings with just a few clicks and in less than 10 minutes.