Walkovers in Chess: What players and arbiters should know

What's a walkover in chess?
How does it affect the result of the game and the rating of the players?

This is an important topic not just for the players but also for the chess arbiters.

Both parties need to know the right way to mark the result.
Players will be putting this result in the scoresheet. At the same time, the arbiters will be entering the result in a chess pairing software.

So in this article, we've created a detailed overview of this topic for both - the chess arbiters and the chess players!

What's a walkover in chess?

A walkover occurs when a player doesn't show up at the chessboard within the stipulated time after the match has started. As a result, the player who doesn't show up is awarded a loss, while his opponent is automatically declared the winner of that game.

The arbiters decide the stipulated time and announce it before the tournament begins!

It could be as high as 1 hour (for a classical game).

In others, there could be a zero-tolerance policy too - meaning if a player isn't sitting at the chessboard once the round has started, he's immediately given a loss!

An Example of a Walkover

Let's picture 2 players who are paired against each other - John and Ben.

John reaches the tournament venue on time and is sitting on his board to face Ben. Ben, on the other hand, is yet to arrive. The round starts but still, there's no sign of Ben.

As per the tournament rules, the grace time/stipulated time is 20 minutes.

So if Ben doesn't show up 20 minutes after the round starts, he'll be awarded a loss.

But if he reaches before the 20 minutes, the game can continue!

What happens in the case of a zero-tolerance rule?

In zero tolerance, there's no grace time. So if Ben isn't seated at the chessboard when the games are supposed to start, then John can claim the victory!

What happens to the ratings of the chess players after the walkover?

After the walkover, the player who doesn't show up gets zero points while his opponent gets a full point.

However, the ratings of either of the players aren't affected. Nobody gains rating points, nor do they lose it.

Why do players give a walkover?

One of the most common reasons for a walkover is not being able to reach the board on time. There are endless reasons why someone would get late: from forgetting when a round's starting time to getting stuck in traffic.
Not feeling well is another reason why players forfeit the game.

Higher-rated players often give walkovers in the last round when they're unwilling to play a weaker opponent so that they can 'protect their rating'.

The higher-rated players know that they don't have much to win and everything to lose when they're playing a lower-rated opponent. Because the risk-reward equation is less, they rationalize their decision not to play. It's unsportsmanlike but, unfortunately, occurs in tournaments.

Some reasons are beyond one's control.

For example: In the 2019 World Junior Championship, 2 Iranian players - Alireza Firoujza and Amin Tabatabai, gave a walkover to an Israeli player. It turns out that the government of Iran players banned its players from competing against their Israeli counterparts, hence forcing the Iranian players to abandon the match!

One can't do much in such situations.

How is the 'walkover result' written?

The walkover results are denoted by + and - signs as below:

Yes, the third and last result is actually possible!

How to put a walkover result in a chess pairing software? (2 Steps)

Now that we've covered the basics of a walkover, let us show you how to put it in the ChessManager pairing software. This is important to know for a chess arbiter.

We've created a mock tournament (with players like Magnus Carlsen, Hikaru Nakamura, Garry Kasparov!) to walk you through this process!

Select the board where there was a walkover. Let's take the game between Garry Kasparov and Maxime Vachier Lagrave for this example.

A pop-up like the one given below would appear on your screen. 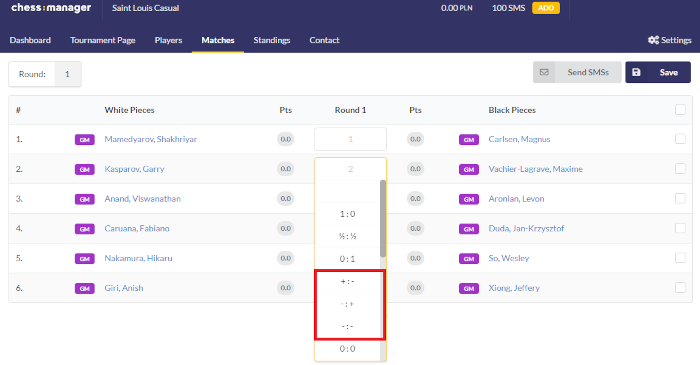 Let's consider MVL couldn't show up and therefore, Kasparov got a walkover. So what should the final result look like?

Since Kasparov (White) has won, put the walkover result as +:-. And voila, you're done!

Once again, remember that a walkover is treated differently than a White win (1:0) or a Black win (0:1).

What if my opponent shows up for the game, plays 1 move and then disappears completely? Is that a walkover?

The walkover rule ceases to exist when your opponent shows up to the game and plays his first move. After their move, the game has officially started. To win, you either need to:

Checkmate them
Force resignation
Wait for their time to run out.

Since they're absent, you technically can't checkmate or force them to resign. So you'll have to wait for their time to run out before you can claim victory.

But look at the bright side, the reward for your patience will not only be a victory but also include rating points 🙂

Walkovers happen and will continue to happen all the time in a chess tournament. As a chess player, it's fun to win a full point without playing a move.

For a chess arbiter, knowing how to correctly put the walkover result in the system is important. And the right tournament software can save you tons of time through this whole process!

Our chess pairing software can help you do that! Try it now for free!