Preparation for the tournament
"More than anything - preparation is the secret to success."
Henry Ford (1962)

Unreadiness of the player may result in his poor start, however the weaknesses of the organiser and the arbiter may be noticeable by all participants of the event. Just as sometimes with the chessboard "from the side you can see better" and fans, with different perspective, analyse the brilliant moves that players do not consider at all, just as the organisers and arbiters do not always see what can be improved. Therefore, you should forget about past tournaments for a moment and think about what a perfect one should look like. Not everything can be improved right away, but even a small detail can change a lot.

The most important is an idea

The hardest part is starting and organising the first tournament. I hope that writing articles for a blog is similar and later it will be plain sailing...

In the tournament, naturally, the organiser begins the whole process, he should provide the right conditions for the game, devise the rulebook, make the event attractive, etc. However, before that he must come up with the idea of organising the tournament or agree to someone else's proposal and develop a general concept of the event. If he gets the order to organise the tournament - it's easier. At first he receives a list of requests from the commissioning party, then he thinks of ways on how to execute them step by step. A more interesting challenge is to do something from scratch.

I remember one of my first tournaments in which I was an arbiter and organiser. In the year I came of age, I already had a driving license and a laptop with a proper software - almost everything I needed to run a tournament. It was election year, so the idea for the "Trzcianka City Council Cup Tournament" came by itself. In exchange for a high prize pool for a local tournament, I promised full commitment to organising the event and already at the first meeting with the chairman I presented a detailed description of the tournament along with the first version of the organisational announcement. I also had a short grant application that I wrote in almost two days. It paid off because the turnout was good and the games turned out to be very successful. Of course, invitations, reports, and posters appeared in many places as if by themselves - but that was probably normal for the election year ...

Chess arbiters, regardless of experience, also prepare for all tournaments. Some require "the usual" - knowledge of the rules, appropriate equipment, cooperation with the organiser, etc., but there are also tournaments for which preparation can focus not only on the basics.

When I was refereeing at the Polish Army Championships for the first time, as a part of preparation I learned all military ranks in order to, for example, by looking at the shoulder pad, address an officer and even a player-officer per. "Mr. Colonel". This is of course a good addition, but there are cases where preparation can have a direct impact on the course of the tournament - e.g. before the European Blitz and Rapid Chess Championship (Katowice 2017) for over 1000 players, the chef arbiter with a stopwatch in hand, tested me on how I deal with entering game results in the ChessManager admin panel. I trained beforehand and checked whether I got it wrong. It was only after the 'exam' that I was appointed 'Pairing Officer'. 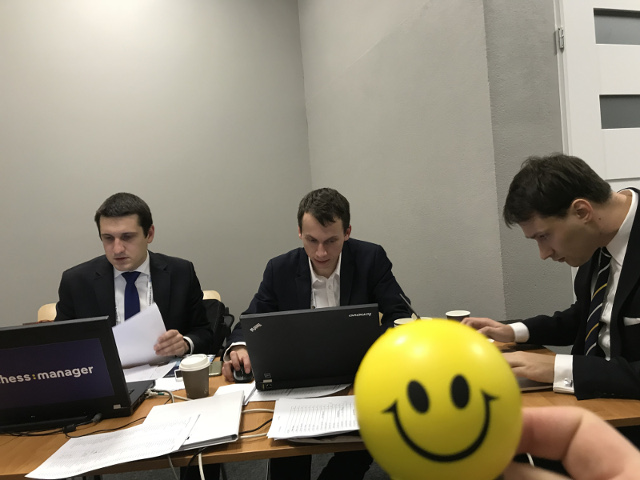 Each arbiter has favourite items that he takes to the tournament. In addition to the obvious equipment such as a computer, printer, current FIDE Game Rules printed and chess records, it is worth taking a few more things. For example, a well-equipped first aid kit left where competitors can see it can increase their sense of security. We definitely don't want anyone coughing too often during a chess game - so a throat medicine will come useful ...

All school supplies, such as scissors, markers, sellotape will definitely be used in the game room.

It's also good to have some electronics, e.g. an extension cord, flash memory. A backup source of energy and the Internet can also be very helpful.

I remember how in 2015 I was moving from Poznań to Poznań via ... Iwonicz (600 km) - then I put all my things in the car. At the tournament, which I judged there, you could say that I was prepared for everything (among others, several umbrellas and a barbecue came in handy), but I think that the referee's kit will fit in one backpack.

And what do your preparations for tournaments look like (as an organiser or an arbiter as well as a player or supporter)? I encourage you to share stories and valuable advice