My house, my rules - one's own tournament rules

There were two chess centres in one small town. The first - with traditions, guaranteed pleasant time in an unchanging group. The second - created from scratch, attracted more and more people. Instead of competition, cooperation was chosen, which resulted in a series of tournaments. Then the two worlds collided. Some wanted to play "as usual", at home. The others were full of strength and ideas, they were focused on genuine tournaments.

I had the pleasure to referee these joint games. After conducting the standard technical briefing, I thought everything was clear. However, after the first round, considering various complaints, I made some notes and before the start of the next game, I completed the earlier briefing with a few minutes of training on the current rules of the game.

The first incorrect move loses the game (even then such rules were in force), the inverted rook, however, is not a queen, you can't take the king ... - these are just some of the rules that according to some I was supposed to look at leniently. It's just a local tournament. On the other hand, there were well-trained young players who did not even think about forgiving any breach of the rules. What should the arbiter do? In my opinion, the rules of the game should always be the same, whether it is a grandmaster tournament or one done for children (maybe then the exception was school games where the first wrong move did not mean defeat). I persistently explained to all players concerned the issues of the Code and my position on compliance with them, which not everyone wanted to agree on.

When after the tournament one of the officials asked me if I saw any solution to the problem in subsequent editions, I did not hesitate to answer - the only way for anyone to not have any doubts that they have to comply with the rules is ... to submit the tournament to FIDE. Such tournaments must meet specific requirements and, by the way, the rank of the competition is raised.

No one has ever won with FIDE, ever since then everyone has played properly and even the friendly games are played on tournament rules, to which everyone has got used to.

Each arbiter draws attention to the players' unusual behaviour. Some are very nervous about running in the game room, others about strongly pressing the clock. Some also say that in order for the tournament to be in order, at the very beginning one should punish someone exemplarily. I don't like when players start the game before the official start of the round. I consider such games to be social and I usually ask for them to end. Sometimes the players answer that this is a tournament game, which meets with my surprise and the reply that the previous round has ended and the next one has not started yet. Instead of a whistle like on a football field maybe a gong would be a good custom.

By the way, an official hitting a gong is perhaps even more media than making the first move. At the Individual Polish Championships I organized in the Main Building of the Poznań University of Economics, the first round was opened by the UEP Rector and two Vice-Rectors who made the first move (in the groups of women and men). His Magnificence, by hitting the gong, gave the signal to start the game. 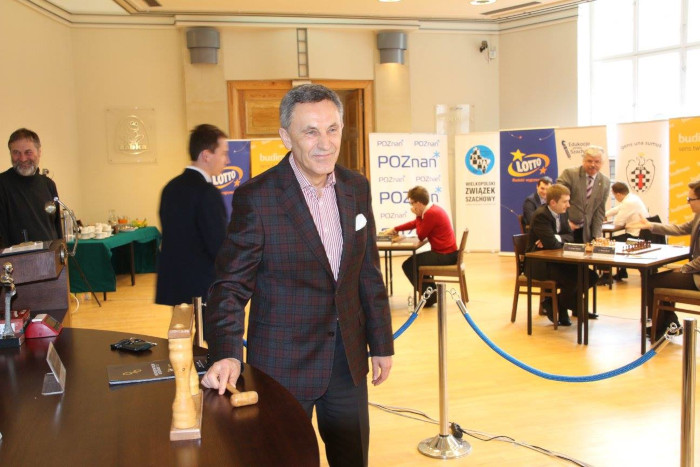 Telephone in the game room

11.3.2.1. During the game, in the competition area, the player is not entitled to have a mobile phone or any other electronic device, except those approved by the arbiter. However, the tournament regulations may allow the storage of these devices in a separate briefcase, purse or player's other packet, provided that the device is completely turned off. This packet must be placed in a place agreed with the arbiter. In addition, none of the competitors has the right to move this packet during the game without the arbiter's permission.

The arbiter may approve all electronic devices. I use this rule and at the technical briefing of the tournament (especially blitz and rapid chess) I approve all mobile phones belonging to people who use the ChessManager function in the form of sending personalized matches via text message. Of course, provided they are in mute mode during rounds. In addition, I recommend turning off the device or turning on airplane mode for the duration of the game.

In competitions played at the pace of standard chess, I allow the phone to be stored in a separate bag. Consent to leaving telephones on the arbiter's table may be met with too much interest:

And what do the tournaments you play or referee look like? Maybe you have some interesting practices? Share them in the comments!