How to prepare a chess tournament

The Admin Dashboard should be done in such a way so everyone can carry out chess matches in accordance with the rules. You can organize a chess tournament without long preparation, but before its start you should think about its formula. Developing an organizational announcement is always a good idea! 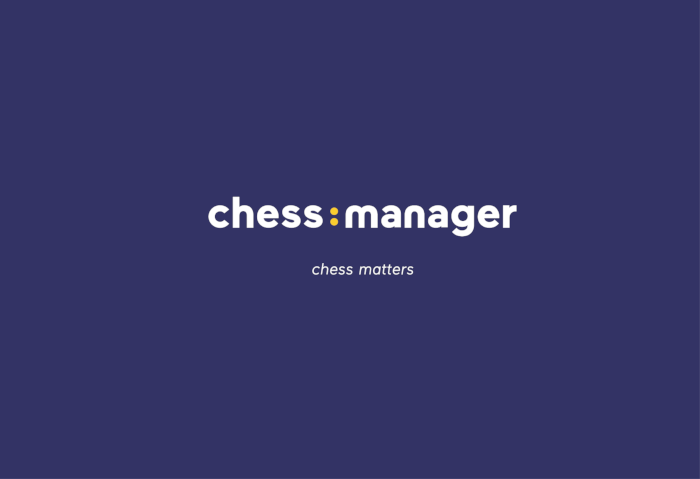 The regulations should contain, above all, such information as:

1. Date and place of the tournament:

At this point, we should specify the place of competition and inform those concerned primarily about the expected start date of the tournament. The estimated end time is certainly appreciated.

Depending on the expected number of players and the time available for the competition, we should propose a specific competition formula. When we have at least a few days to play the tournament, it is worth choosing the standard pace (time for one player to play each round is at least 60 minutes). Most often, however, one-day tournaments are organized, so we have a choice between blitz chess (10 minutes or less per game for each player) and the most popular - fast pace, where the player has more than 10 and less than 60 minutes to play one round. Electronic chess clocks allow you to set the second addition, which I strongly recommend. Then we avoid problematic ends, where the winning side will not be able to finish the game due to the passage of time. To estimate the duration of one round with a second addition, it should be assumed that one game lasts about 60 moves, so e.g. a round played at a rate of 10 minutes per game for a player, with an additional 4 seconds for each move will last 2 x (10min. + 4min x 60) = 28 minutes. The time needed to enter the results, publish new matches and take places by the competitors is about 5 minutes, so one round of the abovementioned pace lasts about 33 minutes. Assuming that we have a maximum of 4 hours to play the tournament along with organizational activities such as conducting the ending and that at least a dozen people participate in our tournament, I recommend the Swiss system over a distance of 6 (or 7) rounds. When there are fewer players, it is worth playing a circular system, also called peer-to-peer.

When we release an organizational announcement, we should specify the group of recipients and the conditions of participation, such as charging the entry fee, as well as the exact manner and deadline for registering applications. The free version of ChessManager allows you to receive entries via the electronic form, and the PREMIUM functionality also offers charging the registration fee.

To avoid regulatory disputes, it is worth placing information about the fact that the current FIDE regulations and the Chess Code PZSzach apply in the tournament. You can also include information on how the winners are selected, e.g. the default system used in the ChessManager application, modeled on the FIDE recommendations, is that for winning a game a player receives 1 point, for a draw 0.5 points, for losing 0 points. In the event that two or more competitors score the same number of points, the order of seats will be decided by:

The organizational announcement may also contain other information, such as the organizer and contact persons, prizes, information on GDPR and other legal provisions (e.g. the issue of care, insurance or the use of audio-visual materials).

As we already have a pre-developed competition formula, we can begin to create a tournament website. After logging in to admin.chessmanager.com, you can start managing your new tournament. Before the games we only need the knowledge that we already have thanks to thinking about creating the organizational announcement. To create a new tournament, you must provide basic data such as date, system of play and pace of the game.

It is worth paying attention to the "Enable registration form" option enabled by default - then any person who visits the competition website before the competition will be able to register their readiness to participate. After the potential player has filled in the appropriate boxes, the tournament administrator may accept, edit or delete this entry. The arbiter/organizer can add players also in the "players" tab, but he should always check if the player is visible in the database - after entering the name and surname, a list of people should appear who can be exactly the player that we want to admit to the tournament. If someone is not in this database, fill in the boxes manually. All headings except "Surname, First Name" is optional.

The starting list is automatically sorted according to the following criteria (recommended by FIDE):

After completing the list of players, you can go to the next tab, i.e. the Round. There, by pressing the "associate" button we can create a list of first round pairs. It's good to know that keyboard shortcuts work when entering results:

To print any page, press ctrl + P or right-click, then "print". Specially prepared versions of print pages will certainly help in organizing the tournament. 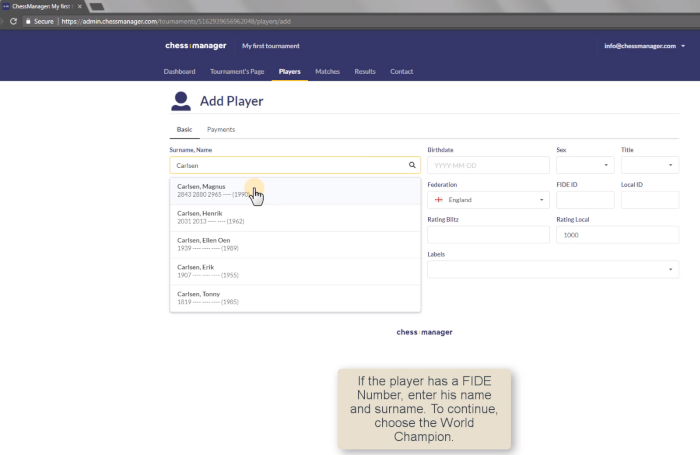 You can see more functions of the ChessManager application with interactive instructions.

I will describe the basic rules of the game as well as the referee's behavior in the most popular offenses in the next post! I encourage you to express your opinion on the functionality and transparency of ChessManager!