Not following the dress code could mean a loss from a dream tournament.

In the 2017 FIDE World Cup, GM Anton Kovalyov was having a good tournament. He had beaten the 5-time world champion, GM Vishwanathan Anand in the 2nd round and progressed to the next.

As he entered the venue to play the 3rd round, the arbiter Tomasz Delega notified him that he wouldn't be allowed to play the round unless he changed to formal clothes and ditched his casual shorts.

It turns out that Anton's attire didn't conform to the tournament's dress code standards.

Things then took an ugly turn and within the next few minutes, Anton Kovalyov marched out of the venue, giving his opponent a bye and a full point.

All this controversy started just because Anton wore shorts and a casual outfit to the FIDE World Cup.

And all of it could've been easily avoided had Anton followed the dress code.

In this article, you'll learn what a chess player, a chess arbiter and an organizer should wear during tournaments.

What is a Dress Code for chess players?

In simple words, a dress code refers to the clothes players should wear during a tournament.

Responsibilities of the Arbiter and the Organizer, Regarding Dress Code

The organizer of the tournament decides the dress code.

On the other hand, it's the chief arbiter's responsibility to ensure that the dress code is observed. They have the ultimate authority when it comes to punishing players who don't follow the code.

A board arbiter's role is limited. If they notice a violation, they must inform the chief.

Dress Code for the players

As per the FIDE handbook, players should strictly comply with the dress code given for the tournament. This applies especially to top-level events.

And it doesn't just apply to players but also to their delegations, including seconds and managers who should comply with the dress code. The player will be held responsible for the actions of the members of their delegation.

Dress Code for the arbiter

Arbiters oversee the dress code. So they must set a good example for others to follow.

In most tournaments, you'll see the arbiters in formal clothing, usually wearing a blazer, a shirt, a trouser or a formal skirt(for women).

Every chess event can have different dress codes. In some, it might be okay to wear shorts. In others, everyone has to wear a good suit.

Let's have a look at them one by one:

At major FIDE events, like the World Championship or FIDE World Cup, there is a strict Dress code that participants must abide by.

What happens if a player doesn't follow the dress code?

It differs for every tournament.

In some, a player might have to pay a fine. In others, they might not be allowed to participate in the round, as in Anton's case.

FIDE Olympiad or a Team Event

The dress code in a chess team event differs from that for other individual events. Players usually wear clothes from their respective federations or clubs in team events.

These could be formal, business casual or sportswear.

In 2017, the World Rapid and Blitz chess tournament were held in Riyadh, Saudi Arabia. If you're familiar with Saudi Arabia's culture, you'll know that wearing the hijab is compulsory for women.

But in 2017, something rare happened. FIDE negotiated with the organizers creating a historic agreement – Women players wouldn't need to wear a hijab in the playing hall.

They still had to wear hijab in the country, but not in the playing hall. 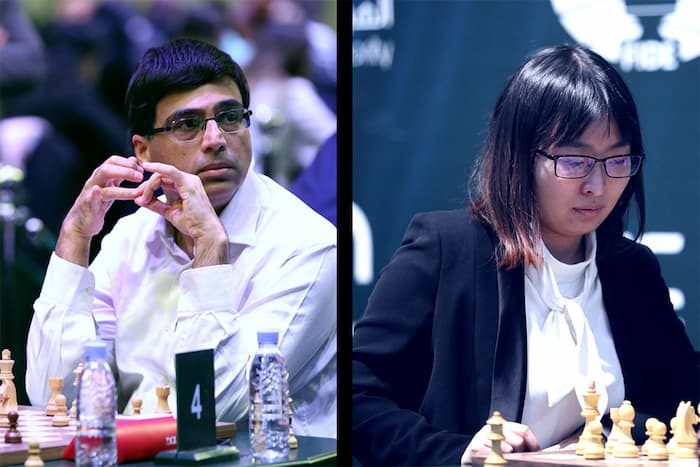 Attire for men and women at the World Rapid and Blitz Chess Championship, Riyadh 2017 | Source: riyadh2017.fide.com

How to differentiate between arbiters and players if they wear the same clothes?

So in major tournaments, all the participating members get an ID card specifying their role in the tournament.

Players will have different cards and so will the arbiters. You can check ID card to recognize who's an arbiter and who's a player.

Also, the organizers usually don't give out ID cards. So it might not be easy to recognize the difference between an arbiter and a player.

However, the arbiter is usually well-dressed in most cases compared to most players. Also, sometimes the arbiters might wear a small badge on their upper body that distinguishes them from the players.

Can you wear shorts while playing in the tournament?

In top tournaments (closed or open), wearing shorts is usually prohibited for players. Most players are expected to show up in business casual attire, the same goes for arbiters.

However, players can wear shorts to the tournament hall in smaller chess tournaments or local events where there's no strict dress code. Arbiters on the other hand aren't allowed to wear shorts. Instead, they'll mostly be in formal attire.

But if you're participating in a small FIDE-rated tournament, the safest option would be to wear a shirt and a trouser or skirt(for women).

Also, to distinguish between the players and the arbiters, check for 2 things - an ID card or a special badge on the arbiter's body. If you see neither, just ask 🙂