Can you play chess anywhere?

Can you play chess anywhere? You definitely can! Of course, you can't make the final of the World Chess championship on the beach or in a dark restaurant, but you can do other interesting events there.

Arbiter with a night vision device 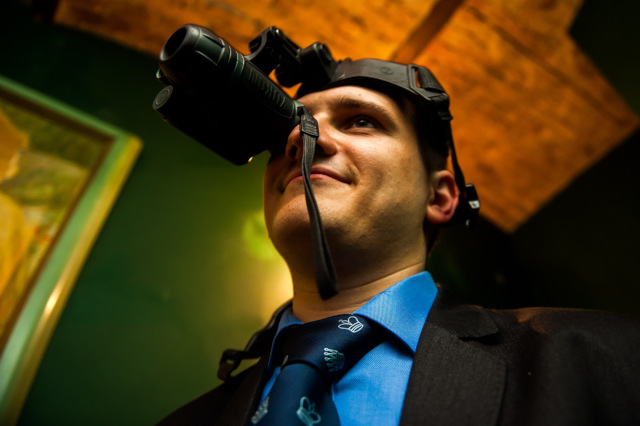 Do you feel that when you visit an fascinating place, you think how to do something chess related there? I do! I once went to one of the unusual Poznań restaurants - Dark Restaurant. Amazing experience, because after entering the premises in the semi-darkness I had a conversation in which I informed the service what ingredients I can't or don't like to eat. Then the waiter put on the night vision device on me and asked to follow him to the table, which was in a completely dark room - no windows, no beam of light. After approaching the place he began to tell what is where - cutlery, bowl of water, napkins. Already then, it was getting very intriguing. While the dishes were being prepared, you could have a conversation with a companion, that naturally you could not see at all - just like the dishes we consumed later. Romantic, but let's get back to chess.

Blind chess is usually associated with a person who sits near the chessboard blindfolded. The player says the moves that the opponent or arbiter makes on the chessboard visible to the audience. The audience's ability to play games in their minds. The dark restaurant seems perfect for this - you don't have to tie your eyes to do it! During the Poznań Chess Festival in 2014, I organized a match between grandmasters Jacek Tomczak and Marcin Tazbir, which took place in the Dark Restaurant. The players sat opposite each other and played chess with each other - saying what move they were doing and pressing the clock. Together with arbiter Oleksander Prohorov, we made these moves on an electronic chessboard. We were the only ones who could see the chessboard – it was green, because we used night vision devices! After winning the match by gm Tomczak, we all went to dinner in a "normal" restaurant - Chessboard.

In 2013, for the first time, I had the pleasure to organize a chess tournament at the City Beach in Poznań, near the Warta River. It was a blitz friendly competition, in which over 40 competitors took part. 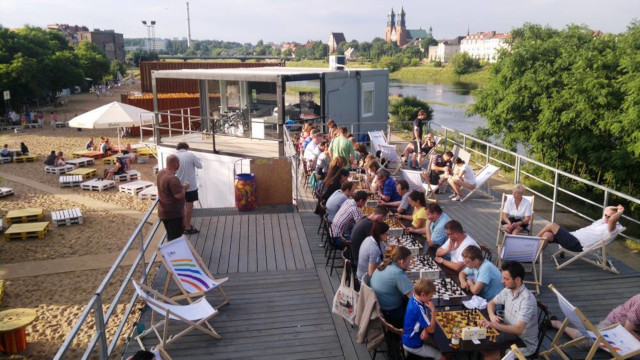 This outdoor event took place periodically until, together with the Poznan activist - Adim Kaniewski, we decided to change something ... We wanted to check how chess players would cope with adverse external conditions - and that's how the idea for the "Chess - Light - Sound" tournament was born. The parties were accompanied by loud, distracting music and disco light falling directly on the chessboard. The experiment was definitely successful, because even experienced players noticed a significant deterioration in the level of their game. Some claimed that they could focus only on chess and what was happening around them did not affect their play.

The Polish Underwater Chess Championships were organized by Jakub Zgarda in the Kórnik swimming pool, on the bottom of which metal chessboards and figures with magnets were placed. Participants equipped only with swimming goggles, at my sign - "onshore arbiter" (because there was also a water arbiter...) began the game - in turns, they went under water to make a move. The time to move was limited by the player's lung capacity.

Competitors certainly felt tired after the tournament, because a few-hour tournament with very frequent diving is definitely not a chess chillout. A lifeguard was watching over the pool, offering the players a top-up of oxygen. 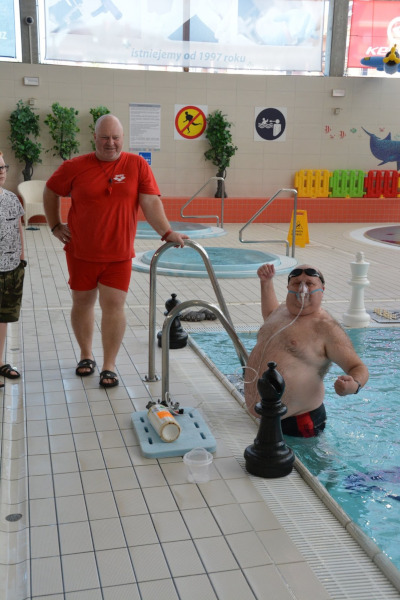 And what unusual chess events did you take part in? Maybe you have any interesting ideas?